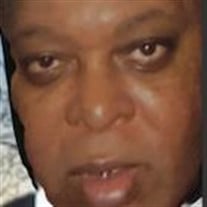 Paul Nathanial Lucas was born July 15, 1954, and passed away May 23, 2020 at age 65 from health complications while a patient at Estates of Bloomington Nursing Home in Bloomington, Minnesota. Paul’s life is a remarkable story of endurance because he lived 20 years past a massive stroke and coma where he was not expected to live. Arlene Plump, a professional nurse supervisor, greatly assisted with Paul’s recovery by firstly her advisement of his transferring to Vencor Hospital for care and treatment and secondly, the medical preparation for relocation to Minneapolis, Minnesota. Through an organized prayer vigil combined with the love and support of his family and friends who came to visit Paul, he gained a second chance at life. Paul was born the third child to the union of Ollie Mae Echols and Steven Lucas, who preceded him in death. HeHe was raised by his mother’s sister and brother in law, Emma Lee and Reverend Samuel Lewis along with their children, Josephine(D), Katherine, Lucille (D), and Bobbie (D). Terry Echols Davis, formally Bessie Echols, was raised in the home with the Lewis’ children and was a positive influence in Paul’s life. Paul attended Robert S. Abbott Elementary School while living with the Lewis family. Paul continued his education and attended Harper High School as he went to live with Odia (Te-Te) and Louis G. Green (G-G). At this time, Paul suffered a serious head injury which caused him to leave formal education and develop his interest in music. At this time he held Elvis Presley as his idle but became a successful Disk Jockey in the Chicago night club. Paul was locally one of the best of the bests in his work as a professional “Disk Jockey” during the 1980s and had many female friends fighting over his charming personality. His love for music carried throughout his life, and he became a music collector. This, coupled with a love for western and action movies, which he also collected, was a passion for him. Second only to his passion later in life for Christian literature, movies, programs and motivational stories, which he embraced soon after his moved to Minnesota and reconnecting to his Christian roots. Paul is presided in death by his uncles James, Selma (Massoleet), Henry Jr.(Sonny), Sperman and his sister Elaine Lucas. Paul is survived by his devoted sister Maxine and her children Channing, Pleasant and Alton, Jr., and his brother Clarance and his children, Ametria, Reynard, Renandria and Claressa. Paul is also survived by his uncle William Echols (Shelva) and aunt Mordei Echols (James (D). A host of cousins, family and friends. Paul believed to the end that God had favored his life by surviving several major medical challenges and giving him a second chance at life. He developed a strong faith in God by living a born again life as a Christian. He would often say, “the bible says, “ we are supposed to love everybody!”

Paul Nathanial Lucas was born July 15, 1954, and passed away May 23, 2020 at age 65 from health complications while a patient at Estates of Bloomington Nursing Home in Bloomington, Minnesota. Paul&#8217;s life is a remarkable story of endurance... View Obituary & Service Information

The family of Paul Nathanial Lucas created this Life Tributes page to make it easy to share your memories.

A comforting word from you means a lot.

Send flowers to the Lucas family.